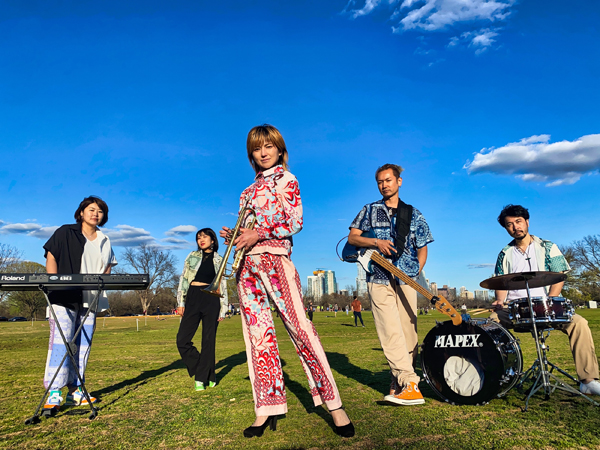 Chihiro Yamazaki (tp) started a band with Satoshi Yamashita (dr), Koji Yamamoto (Ba),Hana Takami (Key) in summer 2010.
Their unique sound witch is called "Singing Instruments" based on Instrumental Pop came from many different back grounds
such as jazz, fusion, classical and rock.
They performed around Los Angeles only after half year from their establishment and sold all the tickets.
Their first DVD release party at Shibuya JZbrat on February 2012 was successful, and they won the first prize at Sapporo
Park Jazz Competition out of more than 250 groups in July.
They released their first album "Yozorano Trumpet" featuring Raffaele Celeste 'Nini' Rosso song"Il silenzio" on November 2012.
And new member Miz -Guitar player- joined the band in the beginning of 2013 so that they can spread their musical idea.
They performed at SXSW 2013 as well as touring 8 cities over the States such as Chicago, Columbus, New York, Toronto CA, Las Vegas,
Los Angeles and San Francisco. During the tour, they have got a lot of
interviews by the press who were impressed by their powerful performance and also they quickly sold more than 4000 CDs.
From then on, They have been performing at SXSW every year- 2014, 2015, 2016, 2017. Also they made a big success at Toronto Jazz
Festival in June 2013. In Febuary2014, Chihiro released her first solo album
from Sony Music and she has done the big domestic tour.
That grew the amount of audience up drastically. From then, they’ ve performed bigger festival such as Monterey Jazz Festival,
Groovin' Summer Festival... All of them had more than thousand audiences.
Their international project is now getting bigger and bigger. In winter 2015, they had their solo hall concert in Seoul Korea and the
tickets were sold out. Also performed in the Bay of Island Blues and Jazz Festival 2016 - New Zealand successfully.
In coming August 2017, Chihiro will release her second solo album from the major label King Record.
Performed at SXSW2018 for the sixth time in total in March 2018.
September 2018 Chihiro Yamazaki + ROUTE14band's 5th album "Ain't no distance" was released.
February 2019 "Triangle Relationship feat. Takuya Miura"'s 2nd album "Lovely Relationship" is released from King Records.
August 2019 - Performed at NZ Bay of Island Jazz&Blues Festival for the fourth consecutive year.
October 2019 Collaboration single "Dear Friends Feat. Chihiro Yamazaki + ROUTE14band" with Mika Shinno is released from King Records.
Oct 2019Performed at ChilpoJazz2019 in Pohang, Korea.Released "Mahal" and ” JOURNEY” , the first distribution single in June 2020.
February 2021: 10th anniversary live "JOURNEY" at 1000CLUB in Yokohama as a delivery-only live.
Performed at SXSW2022 for the seventh time in total in March 2022.
August 2022 - Performed at NZ Bay of Island Jazz & Blues Festival for the fifth consecutive year.

He has distribution agreements with JinuRockEntertainment in Korea since 2013 and HiFive Technology Co.,Ltd. in China since 2019.

They are one of the most popular bands in the world today, and are expected to be active not only in Japan but also in the world.