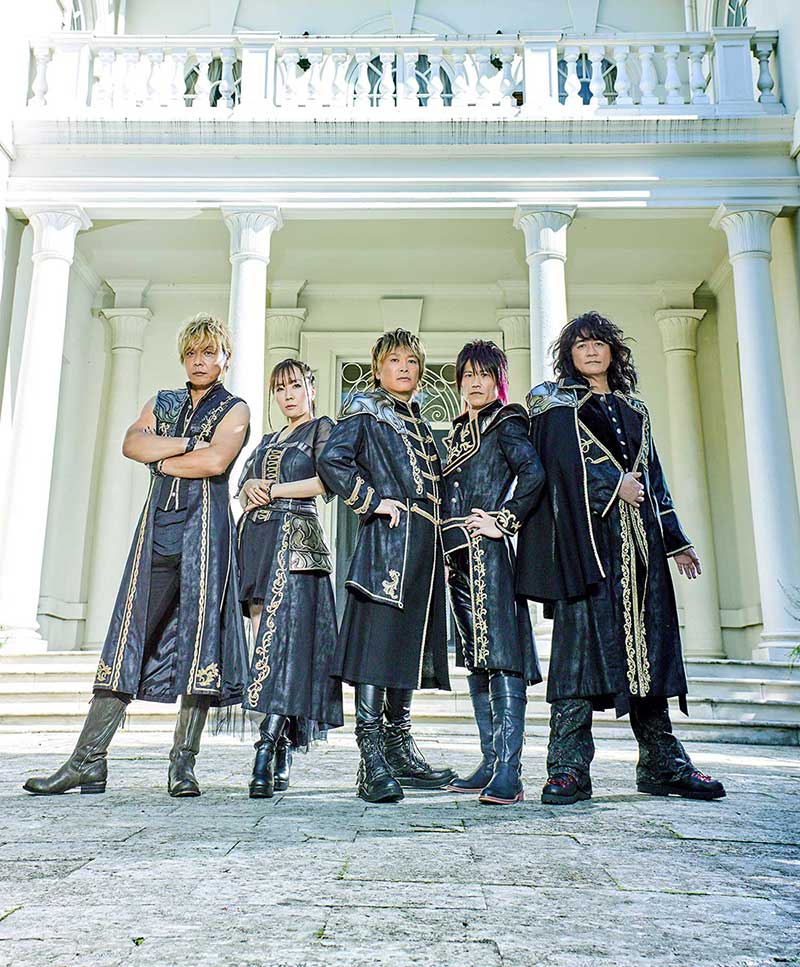 JAM Project ＜JAPAN ANIMATIONSONG MAKERS＞
In order to regain the anime songs which are full of original powerful spirits in the animation that continues to progress, they were launched by powerful singers in 2000.
Currently, there are five regular members. Their names are Hironobu Kageyama, Masaaki Endoh, Hiroshi Kitadani, Masami Okui and Yoshiki Fukuyama.
The members compose "anime songs" for "anime" by themselves. They are involved in everything and are continuing to move forward now.

Establishment declaration
For the children who are responsible for the future... and for the adults who don't forget their dreams...
"The heros in the screen and the children in front of the screen are also seeking powerful voices and spirits. "

It is already obvious, but no children in Japan has grown up without receiving the baptism of robots and superheros! ! In the distant memories, everyone has imagined a giant robot that stands up bravely with the sunset on the back. Also, everyone must have been full of sense of justice and fighting spirits in their small heart. Everyone must have played with their childhood friends in a park near their house all day, repeated their transformation poses and special moves and jumped from the top of a jungle gym.

And there is one more thing we want you to remember. We loved TV cartoons, and we also loved the "theme songs" as much as the comics! ! Of course it's the special music for heros who fly in the sky, crush the mountains and rout the enemies with their special moves. The heros have been made for only the main characters.

Currently, the animation in Japan is the most advanced in the world. Many works are shown on TV around the world. They are big hits and keep breaking the record of the audience rating in those countries. We want to compose and sing theme songs that are suitable for Japanese animation that has advanced to that level! !
Even if big artists make the theme songs popular with a tie-up strategy, the theme songs that are full of dreams and power as if they can push Goku, who breaks rocks, rides Mazinger and clouds and flies around the sky, from behind disappeared! !

Because of such purport, a unit called "JAM Project" was launched by some singers.
Each of them has built his or her own position in the genre of anime songs. Moreover, they felt sorry about the situation as mentioned above. They are full of anime song spirits and want to make such songs again. Most importantly, their voices have "power", which is different from other singers'.

When they focus on being singers, all members are present. They are the strongest unit and rearrange various patterns. For children and anime fans around the world, they are going to compose anime songs that will continue to be sung forever and exist with the heros.

We think the fact that they gathered in one name is able to clear a lot of things.
And also, the rich individuality of each member will become one. We believe that they will stimulate each other and continue to compose exciting songs in the future. We hope that this project will become a trigger and anime songs full of powerful spirit will be composed.